Neos receives tentative approval for scheduled US routes
The Italian airline intends to begin marketing services 'as soon as possible.'

Milan-based airline Neos has received tentative approval from the US Transportation Department (DOT) for exemption authority and an amended foreign air carrier permit.

The leisure carrier already has permission to provide charter flights to the US, but in March requested this be amended so it can fly scheduled routes.

In addition to authority currently contained in the US-EU aviation agreement, approval was also sought to conduct scheduled and charter flights on additional routes made available to EU carriers in the future.

The DOT said it tentatively finds and concludes “that the public interest warrants granting the applicant an amended foreign air carrier permit” subject to a series of conditions.

In Neos’ application, the carrier said it plans to begin marketing services “as soon as possible.” However, the airline has not revealed which US destinations would be served.

Before the pandemic, Neos was operating a number of transatlantic services, including routes from Milan Malpensa (MXP) to Havana (HAV) and Varadero (VRA) in Cuba; La Romana (LRM) in the Dominican Republic; and Pointe-a-Pitre (PTP) in Guadeloupe

Neos began commercial operations in 2002 and operates a fleet of six Boeing 737s and six 787s.

Earlier this month, the carrier took delivery of two 737 MAX 8s, with two more set to arrive imminently. The new jets are expected to enter service this summer on short and medium-haul routes. 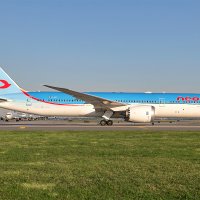 The Italian airline intends to begin marketing services 'as soon as possible.'