On Jan 19th 2021 the KNKT reported that the FDR contained 330 parameters of a total of 18 flights. The KNKT have already developed a general picture of the accident, however, need further data from the cockpit voice recorder before publishing any information. Inspections of Boeing 737-300, 737-400 and 737-500 in Indonesia have been ordered.
Clicca per espandere...

On Jan 15th 2021 the KNKT reported that the data of the FDR have been successfully downloaded, all 330 parameters recorded are in good condition and are currently being analyzed.
Clicca per espandere... 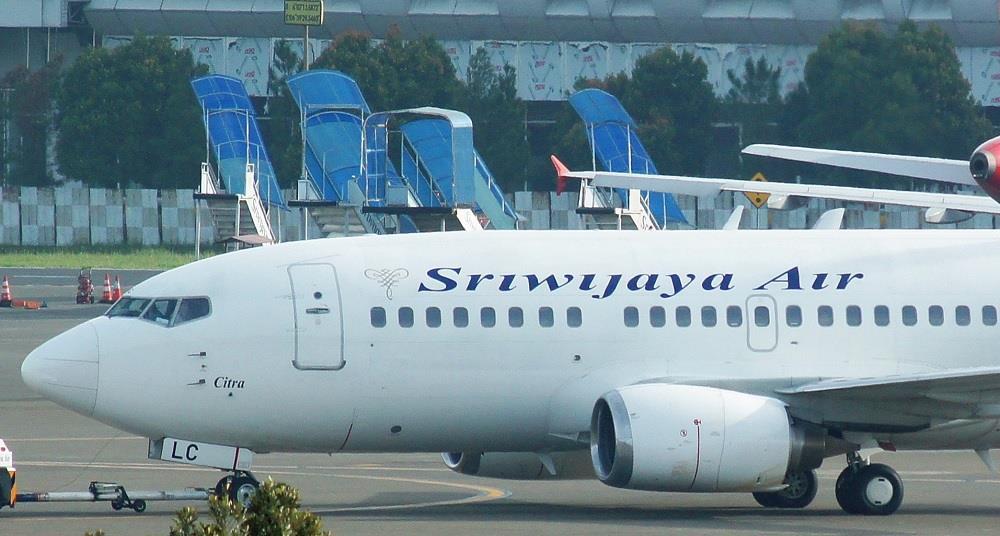 Components of the crashed Sriwijaya Air Boeing 737-500 including the flight-control computer, autothrottle computer, and autothrottle actuator assembly are undergoing examination, a Indonesian parliamentary commission has heard. The commission held a session on 3 February during which various...

Components of the crashed Sriwijaya Air Boeing 737-500 including the flight-control computer, autothrottle computer, and autothrottle actuator assembly are undergoing examination, a Indonesian parliamentary commission has heard.
The commission held a session on 3 February during which various representatives involved in the inquiry provided preliminary information on the flight and updated parliamentarians on progress with the investigation.
Investigation authority KNKT informed the commission that the aircraft – operating Jakarta-Pontianak on 9 January – took off at around 14:36 on 9 January, initially heading west-northwest before turning north, whereupon there was a communication request for a heading of 075° at 14:38:51.
But although aircraft continued to turn to the right as it climbed it does not appear to have reached this heading, according to a flightpath diagram presented to the commission.
About 10s after the heading exchange the crew was instructed to hold altitude at 11,000ft.
KNKT states that, having received the air traffic control instruction to stay at this altitude, the pilot changed the autopilot from the pre-programmed strategic mode – using LNAV and VNAV, lateral and vertical navigation – to the tactical mode, enabling pilot-selectable heading and vertical speed.
“Then the aircraft began to slowly turn left until it finally dived down and hit the sea surface,” it says.
According to the flightpath diagram, this deviation to the left appears to materialise just before 14:40, some 53s after the instruction to hold at 11,000ft and just after the crew was cleared to resume climbing to 13,000ft.
The aircraft reached a maximum altitude of 10,900ft at 14:40:05 and then started rapidly to descend, with the last data point, indicating 250ft, received only 23s later. 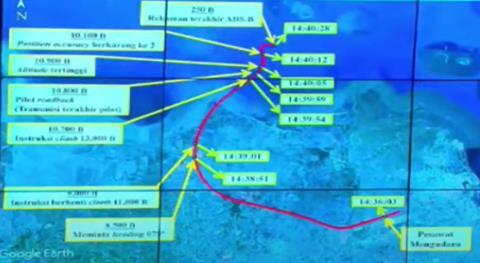 Source: KNKT
Investigation authority KNKT presented the main points on the flightpath to the commission
KNKT says it extracted 27h of information covering 18 flights from the flight-data recorder. Maintenance log records showed no damage to the aircraft during four flights on the day of the accident.
“The findings on the aircraft’s engines show consistency with the engines’ still being on before the aircraft hit the water,” it adds.
Both crew members were experienced. The captain of the aircraft had over 9,000h on type from a total of 17,900h while the first officer had nearly 5,000h on type. Over the previous 90 days they had respectively logged 142h and 113h.
The component examination will include other key items including the ground-proximity warning system, says KNKT, and the inquiry plans simulations of the flight and interviews with Sriwijaya Air’s management.
Climate and meteorological agency BMKG gave a detailed presentation pointing out that during take-off the cumulonimbus clouds above Jakarta had started to decay, with rain intensity reducing and visibility improving.
Some cumulonimbus clouds over the western part of Java were moving south-east but BMKG states that the 737’s flightpath crossed an area with no significant cloud, rain or in-cloud turbulence. Over a 30min timeframe which included the aircraft’s short flight there were “no lightning strikes” in the area of the flightpath, it adds, with lightning concentrated only in the area south of Jakarta.
Meteorological data for 7-9 January also indicated that the potential for icing lay at 16,000-27,000ft with none at 11,000ft – around the altitude to which the aircraft had climbed.
Search teams have yet to recover the cockpit-voice recorder from the aircraft. The search-and-rescue authorities told the commission that the debris field, between the islands of Pulau Laki and Pulau Lancang, is spread over an area of length 110m and width 80m, at a depth of 16-23m.
A


Sent from my iPhone using Tapatalk