Incident: Airbus A359 at Limoges on Feb 9th 2016, runway excursion during backtrack


By Simon Hradecky, created Tuesday, Feb 9th 2016 20:34Z, last updated Tuesday, Feb 9th 2016 20:41Z
An Airbus Airbus A350-900, registration F-WXWB performing a demonstration flight AIB-8WB from Chateauroux to Limoges (France), landed on Limoges' runway 21 and slowed safely. While turning around at the turn pad at the threshold runway 03 the nose gear went off the paved surface of the runway disabling the aircraft.

Earlier the day the aircraft had departed Limoges as flight AIB-7WB to Chateaurox.

Cathay Pacific this week has made further adjustment to planned summer 2016 operation, including service to Dusseldorf and Sydney. Planned changes as follow.

Lufthansa to base first ten A350s out of Munich

Lufthansa (LH, Frankfurt Int'l) says its first ten A350-900s will be based out of Munich beginning January 2017. The German carrier has a total of twenty-five of the type on order from Airbus Industrie (AIB, Toulouse Blagnac) and will use them to gradually replace its fleet of A340-600s of which it currently has twenty-four. The deployment of the remaining fifteen aircraft has yet to be decided.

“We are delighted that we are able to offer the most modern aircraft type to our long-haul passengers flying out from Munich. The A350 also constitutes an active step towards noise protection," Thomas Winkelmann, CEO of the Lufthansa Hub Munich, said.

Featuring forty-eight seats in Business Class, twenty-one in Premium Economy and 224 in Economy Class, the aircraft's maiden routes will be to Boston and Delhi Int'l.

Airbus sees update on potential bigger A350 at Farnborough

ISTAT: Leahy changes opinion on demand for new A350 stretch


Airbus chief operating officer for customers John Leahy now thinks a market exists for a 45-seat stretch of the Airbus A350-1000 after speaking to multiple airlines around the world.

“I’m the one that started out with probably the most scepticism of is there really a market for 45 more seats,” Leahy says on the sidelines of the ISTAT Americas conference on 29 February. “Now I think there is some market.”
The shift in Leahy’s stance has come after a months-long series of discussions with customers that is continuing even today.
“I’m going to lunch with an airline right now to talk specifically about stretching it,” Leahy says.
The response from airlines so far has been “positive” about launching a further stretch of the A350 to compete with the 400-seat-class Boeing 777-9, Leahy says.
But Leahy’s comments stop short of a formal commitment to launch the programme. More details about Airbus’s plans for the A350 family could be released in July at the Farnborough air show, he says.
“We’ll just say more,” Leahy says. “We might say we’ve talked to the airlines and they don’t think there’s that big of a market there. We might say there is a market and we’re going to launch it before the end of the year.”
But the audience at ISTAT Americas seemed split on Airbus’s commitment to launching a stretch of the A350-1000. A moderator polled the audience with the question: “Will Airbus launch a new A350-1100 widebody twin?” Around 41% of the audience voted that Airbus will not launch a new widebody aircraft before 2020.
But an ISTAT Americas panelist, Oriel co-founder and senior appraiser Olga Razzhivina, strongly supports a stretched A350 launch.
“I think they should do it as soon as possible,” Razzhivina says. “Airbus has always been lagging in the 777-300ER market and they need something to compete with the 777X. And the engine is there.”
Indeed, Leahy agrees that Boeing found a “sweet spot” in the market with the 777-300ER. Airbus launched the A350-1000 to capture the replacement market for Boeing’s record-selling twin-aisle.
But he disagrees with Boeing’s decision to replace the 360-seat-class 777-300ER with the 777-9, featuring about 40 more seats.
“The 777-300ER market didn’t all just magically shift because [Boeing] wanted it to,” Leahy says in an interview. “Most of the market stayed there. But there is probably a demand in that [400-seat] category.”
Asked to describe the technical challenge posed by yet another A350 stretch, Leahy declines to be specific.
“It depends on what we actually do: how many frames we stretch the airframe, how much higher we take the maximum takeoff weight,” says Leahy. “And that’s not been finalised.” 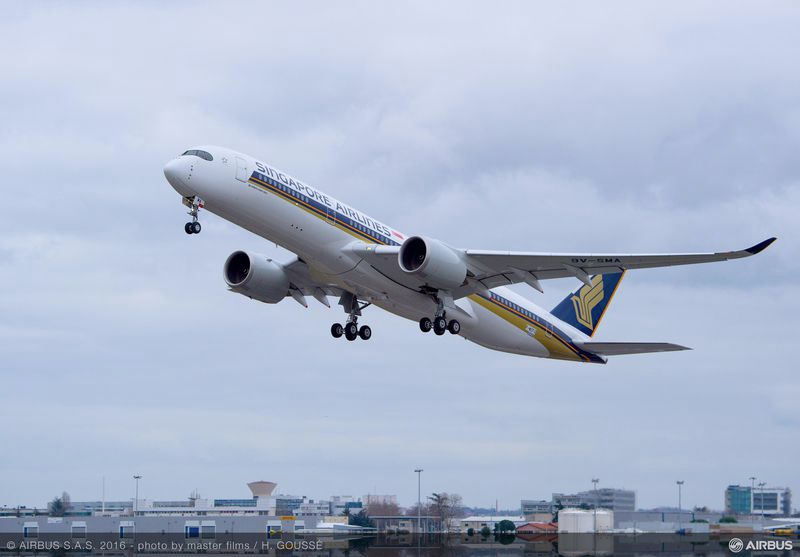