Brexit: Iberia says it is controlled by El Corte Inglés to prove it is Spanish

The airline, which is owned by IAG, could lose its flying rights in the bloc if there is no deal

The IAG group has a problem: if the United Kingdom leaves the European Union in March without a Brexit deal, airlines that are not over 50% controlled by EU nationals will lose their flying rights within the bloc.

Iberia, which is 100% owned by IAG, could be affected by a no-deal Brexit. But according to business sources, the parent company thinks it can prove to EU authorities that Iberia is in fact over 50% controlled by the Spanish business group El Corte Inglés, known primarily for its department stores. And that makes it Spanish.

The Spanish executive has been mediating to help convince the European Commission that Iberia is Spanish, although neither the government nor company officials have provided any public details about the effort.

In the meantime, IAG holds that there is no problem. “We are convinced that we will comply with all applicable norms over ownership and control, both in the UK and in the EU, after Brexit,” said a company spokeswoman.

A spokesperson for the Spanish Public Works Ministry said that “we are convinced that Iberia is a Spanish company, and we are also convinced that, if necessary, the company will make the required adjustments to ensure it complies with European norms.”

There was a first attempt to prove that IAG, which controls 100% of Iberia and Vueling, as well as owning British Airways and Aer Lingus, is itself mostly in European hands.

But the numbers do not add up: 21.4% of IAG is controlled by Qatar Airways, 5.26% by the US fund Europacific Growth, and the rest is shared out among minority stakeholders and shareholders who operate in the Madrid and London stock exchanges

The second line of defense involves claiming that Iberia is Spanish because it is headquartered in Spain, and also because the former Spanish flag carrier is mostly controlled by a very Spanish company: El Corte Inglés. IAG is basing this claim on the complex corporate structure that was set up in 2011 to facilitate the merger between Iberia and British Airways. While there have been a few important changes since then, the political rights remain in Spanish hands.

Iberia has two kinds of owners: at the time of the merger, in order to “guarantee the company’s Spanishness,” Iberia became 100% owned by a company called Ib Opco, where voting rights and economic rights were decoupled. All the economic rights went to IAG, while the voting rights were split between IAG (49.9%) and Garanair (50.01%). Today, Garanair is wholly owned by El Corte Inglés

Garanair has no economic rights over Iberia, and is itself nearly worthless (its 7,000 shares are worth one euro). It was created in 2010, has one administrator – Jorge Pont Sánchez, an executive at El Corte Inglés – and one employee, according to business register records.

As for Vueling, which is owned by Iberia, the parent company figures that if it can prove the latter’s Spanish nationality, both airlines will be protected.

The question now is whether the European Commission will accept that Iberia is a EU company considering that all economic rights over it are in the hands of the British IAG. Whether El Corte Inglés has any real power over the airline is a matter of debate; Jorge Pont, a Corte Inglés executive, is also the vice-president of Iberia.

Lufthansa and Air France, which are IAG’s competitors and would like to take over its European business, will almost certainly object if the EU accepts the argument that political rights over Iberia make it a Spanish company.
Clicca per espandere...

Ryanair UK is born with an AOC

Ryanair has made this announcement as Europe and the UK brace for Brexit:

Ryanair on January 3, 2019 confirmed that the UK CAA has issued Ryanair UK with a UK AOC, which will allow this UK airline to operate UK domestic and UK to non-EU routes in a post-Brexit environment, if necessary.

Ryanair continues to call on the UK and EU to agree a transition deal from March 31, 2019, so that any disruption to flights and British consumer summer holidays in 2019 can be avoided.

“We welcome the Civil Aviation Authority’s decision to grant our UK based airline, Ryanair UK, with a UK AOC, allowing Ryanair to operate UK domestic routes and UK to non-EU routes in a post-Brexit environment.

The risk of a ‘no deal’ Brexit in March is rising, and despite our robust post-Brexit structures, including our post-Brexit plan around European ownership, we continue to call for the UK and EU to agree a transition deal from March 31, 2019, so that any disruption to flights and British consumer summer holidays in 2019 can be avoided.

Brussels has warned IAG that its favoured plans for its airlines to continue flying freely in and around Europe in the event of a no-deal Brexit do not work, in a potentially serious setback for the owner of British Airways and Iberia.
Brexit poses a challenge for some European carriers, which will have to show they are more than 50 per cent EU-owned and controlled to retain their flying rights in the bloc. Certain companies — including IAG — have yet to ensure they will reach that threshold after Brexit, when UK nationals will no longer count towards the tally.
Part of IAG’s strategy to maintain both UK and EU operating rights is to stress that its most important individual airlines are domestically owned through a series of trusts and companies, rather than being viewed as part of the bigger group, which has a high proportion of non-EU investors.

But a senior EU official said: “For IAG, I can’t see how it can be a solution.”
When IAG merged UK-based BA and Spain’s Iberia in 2011, it divorced the voting rights within the subsidiaries from their financial rights, such as dividends. A majority of each airline’s voting rights is held within its home country in an attempt to preserve its nationality, and therefore its flying rights, while IAG holds most of the economic rights.
IAG’s plans rely on the EU taking the view that if a local body owns the voting rights, even if the parent company reaps the economic benefits, it will fulfil the bloc’s “ownership and control” criteria.
If the EU does not accept this, the company will have to buy out many of its non-EU shareholders or face losing its airlines’ EU flying rights following a no-deal Brexit. A new US-UK open skies deal means BA will be able to fly its profitable New York routes after Brexit. 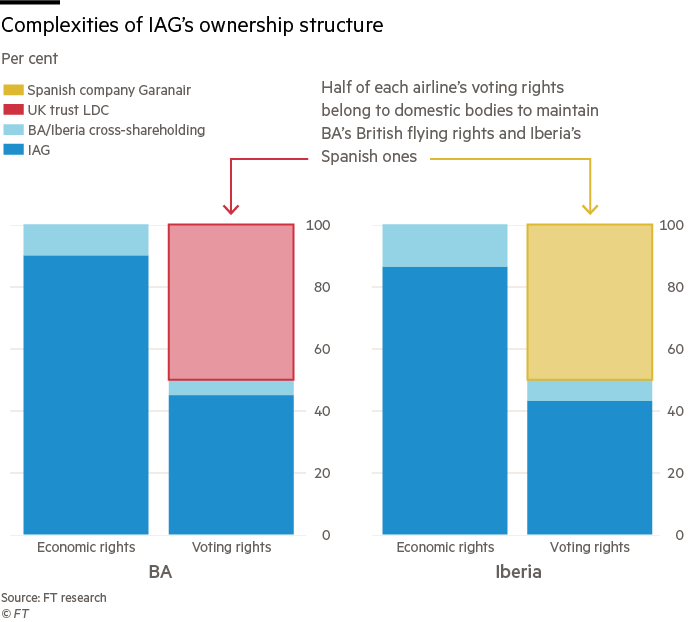 The European Commission has a number of investigations into ownership and control under way and Violeta Bulc, EU transport commissioner, has flagged issues to be resolved in bilateral meetings with transport ministers. Concerns have also been raised with IAG over its ownership structure after Brexit, according to a second Brussels official familiar with the conversations.
IAG, which is a Spanish company that has its headquarters in the UK, said: “We are confident that we will comply with the EU and the UK ownership and control rules post-Brexit.”
Willie Walsh, IAG chief executive, has previously rejected suggestions that the company might face ownership issues as a result of the UK leaving the EU. When asked how IAG was planning to persuade regulators it did not fall foul of the ownership rules, Mr Walsh said: “Magic.”
The group’s chairman, Antonio Vázquez Romero, has said it has “contingency plans” but has not provided further details.

According to a 2010 corporate registration document, a British company called LDC (NCS) acts as a trustee holding 50.1 per cent of BA’s voting rights and minimal economic rights, whereas IAG has 45 per cent of the voting rights and 90 per cent of the economic rights.
LDC, whose latest set of accounts said its business objective was “to enable British Airways to preserve its UK nationality for the purpose of certain international traffic rights”, had turnover of £125,000 in 2017. BA, by contrast, had revenues of £12bn.
Iberia is held in a similar structure, with a Spanish company called Garanair owning 50.1 per cent of voting rights, while IAG has 86 per cent of the economic rights. Last week Spanish newspaper El País revealed that Garanair was now owned by department store, El Corte Inglés.
Simon Phippard of law firm Bird & Bird said: “Without using dual nationals, it seems difficult for a single company to be majority owned and effectively controlled by both British and EU27 nationals.”
He added that if BA were still to be considered British after Brexit, its ability to fly to non-EU countries would be subject “to the UK negotiating new bilaterals with those countries”.
Clicca per espandere...

The European Parliament is pushing to relax aviation ownership rules that threaten the flying rights of airline groups including IAG, owner of British Airways, in the event of a no-deal Brexit.
MEPs leading negotiations on the contingency plans to cope with a hard Brexit are also attempting to scrap the automatic cap on flights between the UK and EU, which was proposed by the European Commission.
The changes are contained in a draft report seen by the Financial Times setting out amendments the parliament’s transport committee is demanding to an EU law that will allow “limited” air traffic to continue with the UK, even if it leaves the bloc without a deal on March 29.
The parliament has yet to approve these amendments and they could be removed in further stages of negotiation. But they are a striking divergence from the commission’s stricter positions. Most EU member states have so far resisted relaxing ownership rules in their negotiations, but some member states are pressing for the EU to grant UK operators a broader range of flying rights. The contingency measures, as proposed by the commission, are limited to around a year.
Brexit poses a big challenge for some European carriers, which will have to show they are more than 50 per cent EU-owned and controlled to retain their flying rights in the bloc. Certain companies — including IAG — have yet to ensure they will reach that threshold after Brexit, when UK nationals will no longer count towards the tally.
This week easyJet announced it had 49 per cent European ownership.
The parliament’s amendment says that the commission “may grant a temporary exemption from the ownership requirement” lasting until the end of March 2020 as long as the airline has a valid operating licence and is less than half-owned by UK nationals.
But it also said the airline must present “credible plans to change its ownership structure in a shortest possible time to comply with the ownership requirement”.
The commission’s proposed regulation, announced last month, was designed to avoid severe disruption in the case of a no-deal Brexit. But it also contained a provision to cap flight numbers between the UK and EU at 2018 levels, which the draft proposal would change.
Airports Council International has suggested that the cap could lead to the loss of 140,000 new flights and nearly 20m passengers between the UK and EU this year.
A further amendment in the report would allow UK and EU27 airlines to continue “code-sharing”, where carriers can sell seats on each other’s flights, “to maintain mutually beneficial levels of connectivity”.
Part of IAG’s strategy to maintain both UK and EU operating rights is to stress that its most important individual airlines, BA and Iberia, are domestically owned through a complex series of trusts and companies, rather than being viewed as part of the bigger group, which has a high proportion of non-EU investors.
The EU has expressed reservations about this structure, although the Spanish government has said it considers Iberia Spanish.
IAG, which is a Spanish company that has its headquarters in the UK, said: “We are confident that we will comply with the EU and the UK ownership and control rules post-Brexit.”
https://www.ft.com/content/4d5e9492...9e233c8#myft:notification:daily-email:content
T