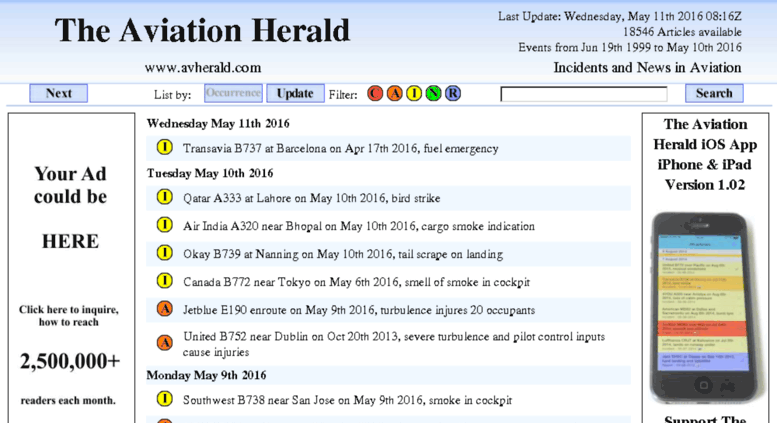 Following its opening on May 12th 2008 The Aviation Herald today (Jan 20th 2017) celebrates the 20,000th coverage released, time for sort of an editorial to present some personal summary of the past nearly 9 years.

Since 2014 The Aviation Herald has been consistently amongst the top 50,000 websites of the world.

The steady growth is also visible in the annual traffic data:

What started out with just a few contacts and a limited number of sources that were scanned daily, has grown into a large network of regular sources and contacts spanning 5 digit figures and more than thousand (official) websites that are daily scanned for new information like preliminary and final reports, notifications of new occurrences, safety alerts, emergency airworthiness directives and other aviation safety related information.

A few e-mails per day in 2008 have grown to about 300-500 per day with peaks of more than 1000 e-mails being processed per day, disabling me to reply to every e-mail, however, I make it a point to respond to every e-mail that results in a coverage. As the e-mail figures alone already make clear, the workload has grown over time, with the increasing number of occurrences being discovered I was thus forced to redefine the scope of coverages, e.g. dropping coverages of medical emergencies and unruly passengers, in order to keep the work load manageable.

Ever since The Aviation Herald started I have repeatedly heard the question: “Simon, do you ever sleep?”. Yes, I do indeed, around about 8 hours each day. An alerting system is in place that enables trusted sources to wake me up around the clock in case of crashes or serious accidents. And I maintain a “holy morning”, each Sunday morning is reserved exclusively for myself – and I go bunkers if an aircraft destroys this Sunday morning routine (it has happened) absolutely requiring immediate breaking coverage.

It may come as a surprise to many readers scanning the reader comments, that the reader comments are indeed moderated. Every comment passes over my desk. Automatic defenses deal with a number of “regulars” trying to spam or troll the board which results in up to 2000 (!!) rejected messages per day. In addition one up to 10 messages will be treated manually by myself every day. This happens as I process my e-mail in between doing focussed work on research of coverages, whenever I have time to “relax” from high concentration for a minute or two and check the e-mail. The moderation principle is simple: in following the guidelines laid down for posting comments I prefer to not overmoderate but leave some leeway to discussions become even more robust. There is nothing wrong with a robust debate on factual bases, moderation jumps in when one of the participants ran out of arguments and becomes personal. I prefer to have a few complaints about lack of moderation rather than hearing complaints of censorships.

Funny as it is, when Ryanair threatened legal action against The Aviation Herald, this was not over editorial content, but was directed against the reader comments which Ryanair had perceived entirely unmoderated, in particular three reader comments were in the middle of that legal debate that Ryanair perceived as libelious towards Ryanair and factually wrong. Those three comments had, immediately after they were posted and long before Ryanair complained about them, already raised an eyebrow with me and I had done a very deep consideration of these comments as I felt those comments were very, very close to the border line of being acceptable or perhaps even beyond. In the end I decided that the comments were JUST within the boundaries of freedom of opinion verbalising the personal opinion of the reader and NOT stating facts. When Ryanair sent their complaint, our lawyer reviewed the claim by Ryanair and felt very uneasy basically agreeing with the lawyer of Ryanair until I sent my opinion of those comments, about 4 pages of write up arguing all aspects of freedom of opinion, facts, opinion, meaning of what was being written and so on. Our lawyer talked to colleagues and my opinion was fully approved. In the end Ryanair also accepted that opinion and the threat was withdrawn.

The Aviation Herald frequently gets quoted by other media. One example were the ACARS messages transmitted by MS-804 just before the aircraft began to lose altitude over the Mediterranean. Based on initial statements in Egypt and France all media around the globe focussed on terrorism and assumed the crash had been the result of an explosion on board. When we released the ACARS messages, all media around the planet turned around within 24 hours and focussed on the fire on board. While this may suggest that our responsibility for coverages has increased and we may have added additional layers of research quality assurance, I saw no reason to change anything in how we research, verify and crosscheck our information. There is no difference, as far as I am concerned, if a coverage attracts one reader or a billion readers. Each of them deserves as accurate as possible information.

I already indicated above that there are many websites scanned daily by myself. AviazioneCivile is one of the pilot fora indeed, that does get scanned by the AVH at least once every weekday.

This concludes a brief review of the past almost 9 years of operation of The Aviation Herald. And we’ll continue – with the support by our readers – in the years to come.